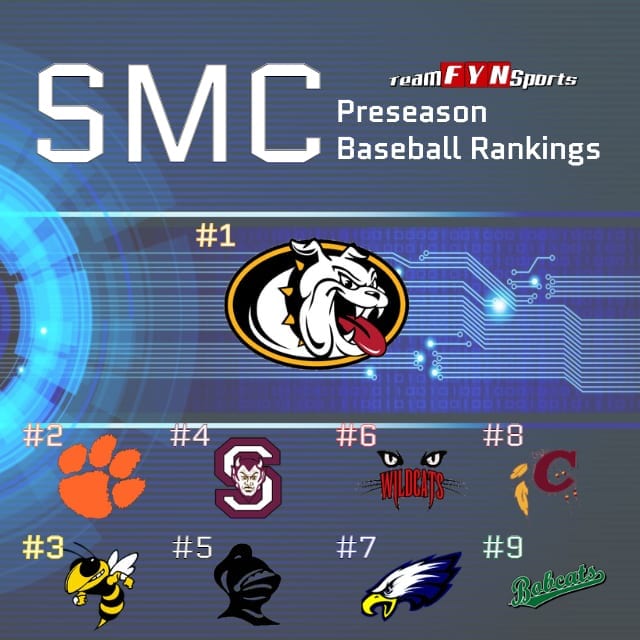 With baseball season about to be kicked off in North Carolina High Schools, FYN Sports writers came together to give you our thoughts on the upcoming season. With no baseball season last year, we are not really sure what to expect for the 2021 season. We talked to players and coaches around the league, and this is the best preview that we could come up with.

The last time we played baseball in the SMC, Rosman took home the conference championship while Murphy and Hayesville were right on their heels at no. 2 and no. 3. Rosman finished the 2019 season 14-2 in conference, while Murphy and Hayesville were 13-3. Rosman has lost two of their top players to graduation in Tanner Ruff and Brennan Chapman, which leads me to believe they are going to take a step back a little this year. Hayesville has also lost some of their guys to graduation, and are also losing one of their starters because wrestling season and baseball season coincide this year.

Murphy- The Bulldogs are returning their top guys this year in the Rumfelt twins and our Preseason Player of The Year Dawson Hensley. I believe that if this team plays up to their potential and is able to squeak by teams early in the year when they may be missing players due to football, then they could run the table. Hensley is a Young Harris commit, and we look to see him lead his team to a deep playoff run this year. Kellen Rumfelt will not return until after football season for the Dogs, but he is going to be one of the key pieces of this team. Hensley led the team in batting average (.491) and RBI’s (27), while Kellen Rumfelt was right behind him batting .407 with 21 RBI’s. A big Win for the Dogs this year is going to be getting back Briggs Cornwell. Cornwell was injured in the last full season that was played, but he still hit .655 with 3 Homers and 23 RBI’s. Speaking of injuries, JR outfielder Payton McCracken was injured during this years football season, but should return midway through the baseball season and will make an immediate impact on this team with his return.

Rosman- We talked about Rosman losing some guys and maybe taking a step back this year, but they do have some returners that are going to lead this team back to a top finish in the SMC. Talon Lance and Randy Moretz will be the returners with the most experience this year for the Tigers. Lance batted .316 in the 2019 season and played in 21 games, while Moretz batted .250 and played in 17 games.

Hayesville- The Hayesville Yellow Jacket team has a lot of unknowns going into this season as it has been two years since they have had a baseball season. They do have the longest-tenured coach in the conference in Jeff Vardo and a strong tradition. They have two constants in their senior leaders Connor Bradley and Jeremy Stewart. Bradley will lead the team’s offense, his sophomore year he had a .646 batting average with 6 home runs. Stewart is the ace of the pitching staff who recently committed to Middle Georgia State to pitch at the next level. They also have a strong sophomore class that the last time they were on the diamond won the middle school conference. With Bradley’s home run potential and an ace like Stewart they may not be favored to win the conference but can potentially beat any of the opponents on their schedule.

Swain- I would look for Damion Lossiah and Carson Taylor to be the leaders of this Swain County baseball team. Both of those guys were by far and away the best athletes on the football field for the Devils this year, and I think that will translate over to the diamond. Lossiah batted .463 with 23 RBI’s in the 2019 season as a Sophomore while Taylor batted .250 through 12 games as a Freshman.

Robbinsville- Robbinsville was 7-9 in 2019, and finished 5th in the conference. This year I think we will see much of the same, although I do think that they could beat Swain and finish in 4th this year. Jeb Shuler, Rossi Wachacha and Kayden Brock will be the main returners for the Black Knights this year. If I were to guess, Brock will be the Ace for Robbinsville on the mound. In 2019 Jeb Shuler batted .463 over 60 plate appearances while Wachacha batted .429. Robbinsville is another team that will be effected early on by guys still playing football and missing the first few baseball games.

Andrews- Andrews is a team that could definitely make a push this year. They are a young team and they know how to win, they proved that this football season. Spencer Bateman is the number 1 returner for the Cats. Bateman batted .403 with 14 RBI’s in 2019. Isaac Weaver is a Sophomore this year and has not played a Varsity season yet, but I would look for him to have a good year. He is a very good athlete. the thing that is going to hurt the Wildcats the most is pitching. They may able to string together some good games offensively, but their pitching is suspect.

Hiwassee Dam- Went 5-11 in conference in 2019, I cannot imagine that they improve on that much this year. I could be wrong however, there are no stats listed online to know who is retuning and what they are losing.

Cherokee- Not known for their baseball prowess, Cherokee is always at the bottom of the conference in baseball season. They only won one game in 2019, and with a year off with no practice and no clue what they will be returning, I cant put them much higher than 8th in our rankings.

Blue Ridge Early College- BREC also only won one game in 2019. They split with Cherokee, so perhaps they could jump to eighth in the rankings this year if they manage to sweep Cherokee, but dont expect much more than that.